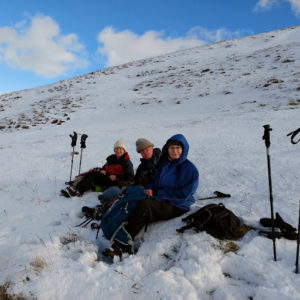 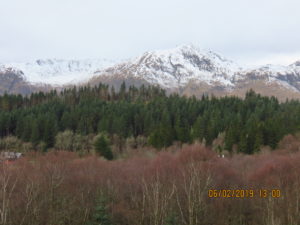 The Glencoe Mountain Cottages had been hired for this trip and after negotiating a bit of a bumpy track from the road to the cottages, proved to be an excellent base to explore the surrounding mountains. At the beginning of the week there was plenty of snow and the weather dawned bright and fair. On the first day we were able to walk from the cottages, up Gleann Leac-na Muidhe and up the slopes of Munro Sgor Na h-Ulaidh as far as the col (798m).

There were 11 club members on the trip and over the following days we split into groups according to what we wanted to do that day. Some went high, climbing Meall Mor (676m), Buachaille Etive Mor, Stob Dearg (1022m) Sgorr a’ Choise (663m) and  Sgorr na Ciche,  the Pap of Glencoe (742m), others chose lower level walks through the forests, where red deer were spotted, or to Inchree to see the spectacular waterfalls and watch the birds and red squirrels at the feeding station near the car park. On Monday  afternoon a group had a strenuous but enjoyable time at the indoor ice climbing wall. There was some thing for everyone.

Unfortunately storm Erik brought high winds and rain on Thursday night washing the snow off the lower slopes and turning the stream running past the cottage, into a roaring torrent, so Friday was a “tea shop day”, not that we had not indulged after walks earlier in the week. We drove to Port Appin and were lucky enough to see an otter catching and eating crabs on the jetty.

The cottages were warm and comfortable, and well kitted out, the weather and snow conditions deteriorated at the end of the week but that is Scotland in February, everyone who went on the trip had a great time and were able to get out and about, so all good. 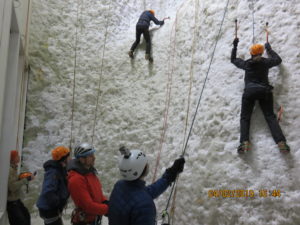 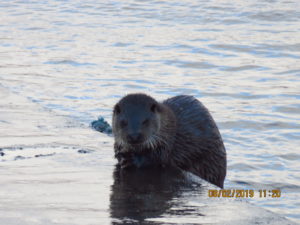 This entry was posted in 2019. Bookmark the permalink.